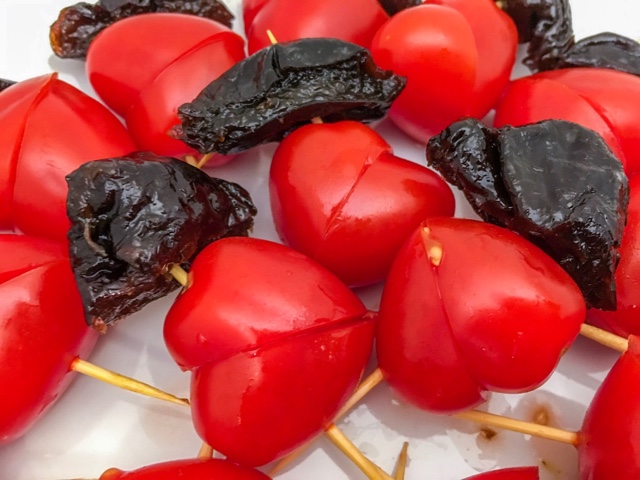 This is one of the most popular snacks in Taiwan. In the olden days we would buy a package of this before heading to the theater.  You can still buy this from street vendors.

My twist is using Sun-Maid’s Prunes (dried plums) instead of Taiwanese Preserved Plums (化核應子).  It is very easy to make and adds flavor to the tomatoes too. You can put them in refrigerator before serving and use them as a refreshing summer snack.

Tina Schumacher began her culinary endeavors and photographic career shortly after migrating to the USA in 2005. Tina’s interest in Asian “food” was derived from necessity, as she was born and raised in Taiwan, where a multitude of culinary delights are found on street corners, family restaurants, and night markets. In the States, she found it hard to find high quality Asian food that hadn’t been “Americanized”. Tina’s photographic career morphed from personal photos to professional level after completing more than 15 college level courses in digital photography to supplement her own skills. She utilized her photos to document over 600 culinary delights, and continues to add to the fold weekly. Tina enjoys water skiing, snow skiing, and travel, when not working or practicing her favorite culinary skills.